The history of the Snowy Mountains has rolled out over tens of thousands of years. The land provided sustenance, shelter and a spiritual home to two aboriginal tribes, the Ngarigo and Walgal people. Europeans arrived in the early 1800s, drawn by the distinctly changing seasons, rich soil and lush landscape. Grazing gave way to a gold rush in 1859, which in turn signalled the start of the ski industry. More recently, the region played an innovative role in how Australia is powered and irrigated thanks to the Snowy Mountains Hydro-electric Scheme. Take a drive through the bustling towns and quaint villages of the Snowy Mountains and explore the evolution of Australia’s high country…

Immerse Yourself in the Culture of Australia’s Mountain People.

20,000 YEARS AGO: While the Ngarigo and Walgal people were the Snowy Mountains’ more permanent residents, many other tribes travelled from the sea to the peaks every summer to feast on Bogong moths and connect through corroborees, marriages and trade. Discover more about the area’s most ancient past by visiting the Bundian Gallery, Delegate, which  features aboriginal art from local and regional artists. Or head to Yarrangobilly Caves, a labyrinth of limestone caves formed 440 million years ago that were home to the Walgalu people and take part in the Wiradjuri Aboriginal Cultural Tour to learn first-hand how indigenous communities thrived by working with the land around them. Please note tours are run subject to availability. Contact Yarrangobilly Caves Visitor Centre on (02) 6454 9597 or Tumut Region Visitor Centre on (02) 6947 7025 for more information. 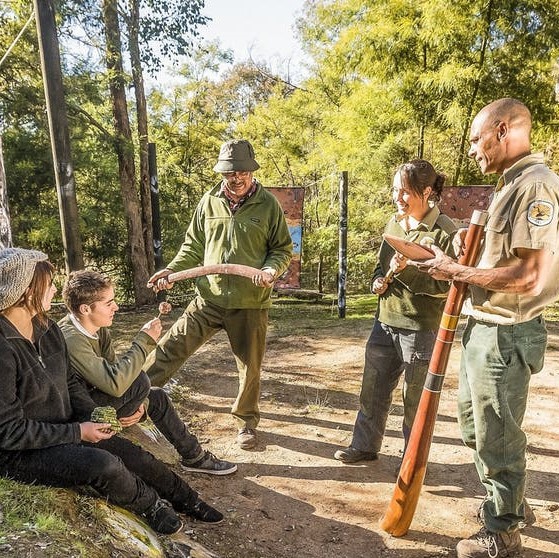 EARLY 1800s: Life was by no means easy for the first graziers of the Snowy Mountains. They lived in roughly built huts and suffered through deeply cold winters and hot, fly struck summers. Despite the hardships, these committed stockmen and their families cultivated the area into a prosperous farming region. Follow in their footsteps by visiting the quiet village of Delegate, where you can view a fully restored and maintained Early Settlers Hut and visit the Delegate History Museum, which maps out the community’s pastoral and timber milling industries. The Cooma Correctional Centre is home to the NSW Correctional Services Gaol Museum, which showcases stories, displays and artefacts dating as far back as convict days. A minimum-security inmate will take you on a tour of the facility, a structure that is over a century old. In Bombala, you can visit Lavender House where you’ll discover an array of locally produced lavender products all housed in a red brick building that was once a nunnery. You’ll also find the local Post Office, National Australia Bank and Olympic Cinema left almost completely in their original form. In Dalgety, head out on the scenic Historic Town and River Walk and you’ll come across the site of an old punt, the only safe place for stock to cross The Snowy River before a bridge was built in 1888. Trace the Steps of the Snowy Mountains Gold Rush.

1859: While moving cattle to new pastures, two farmers discovered gold amid the mountain plains of Kiandra, triggering Australia’s coldest and highest mining boom. At its peak, the gold rush attracted around 10,000 men, women and children and saw the development of a township including a bank, courthouse, school and hotels. Nowadays Kiandra could be considered a ghost town, with only the old courthouse left standing. Despite this the abandoned gold fields still radiate an adventurous spirit, which can be explored by following the Kiandra Heritage Trail* and imagining what life was like for the pioneering miners.

*Please note Kiandra was adversely affected by the fires and is currently closed. Please check with NSW Parks and Wildlife for more information. Discover More About the Birthplace of Australian Skiing

1861: Kiandra’s gold rush was short lived, around a year, but it gave rise to one of Australia’s most enduring past times, skiing in the Snowy Mountains. Norwegian miners modelled how to use fence posts as skis to transport people and equipment. Now skiing is enjoyed by millions of people each year across the region’s four resorts; Perisher, Thredbo, Charlotte Pass and Selwyn Snowfields. The Thredbo Alpine Museum displays a collection of snow sports memorabilia including skis and clothing dating back to mining times, Olympic paraphernalia, images, videos and more. 1959: The Snowy Mountains Hydro-electric Scheme was an engineering masterpiece that carried on over 25 years and changed the face of civil engineering on an international scale. On completion, the Scheme consisted of seven power stations, 16 major dams, 80 kilometres of aqueducts and 145 kilometres of interconnected tunnels. It’s also credited with helping build a more diverse and accepting Australia thanks to the migrants from 30 countries who worked on the project. Find out more by visiting the Snowy Hydro Discovery Centre in Cooma and the Snowy Scheme Museum, Adaminaby.